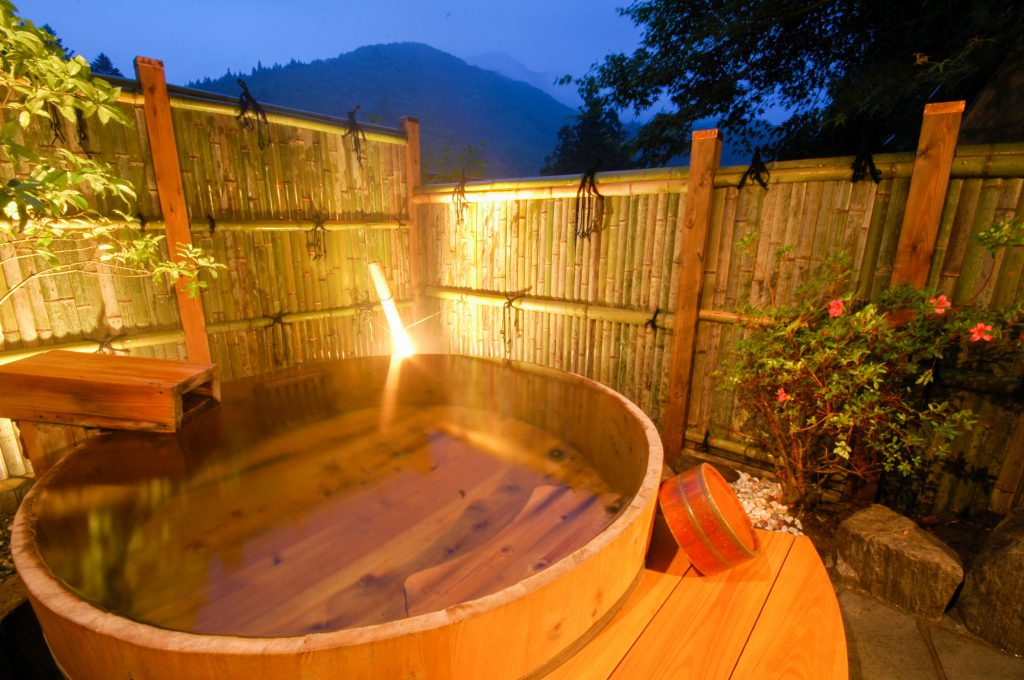 There are more ryokan that have guest rooms with private onsen and private open-air bath recently.

At those ryokan, you do not need to take onsen with other people.

So you can enjoy onsen even if you are from foreign countries, where you do not have habit to take a bath with other people.

Also, even if you have a tattoo, you can enjoy onsen without problems.

The mainstream of onsen in Japan is a style, where you take a big bath tub with other people.

In addition, taking a bath with men and women mixed had been accepted as a normal thing until recently at onsen in Japan.

According to Wikipedia, mixed bathing in Japanese onsen began before the Edo era and had been normal until 1960’s.

Today, mixed bathing is no longer common, and we bathe in men and women separately. Yet, the style of bathing with many people in a large bath is still mainstream.

On the other hand, there are more and more ryokan that has private onsen, where you can bath separately, including our Shima Onsen Kashiwaya Ryokan.

They are representing as “private onsen,” “family bath,” and “private open-air bath.” 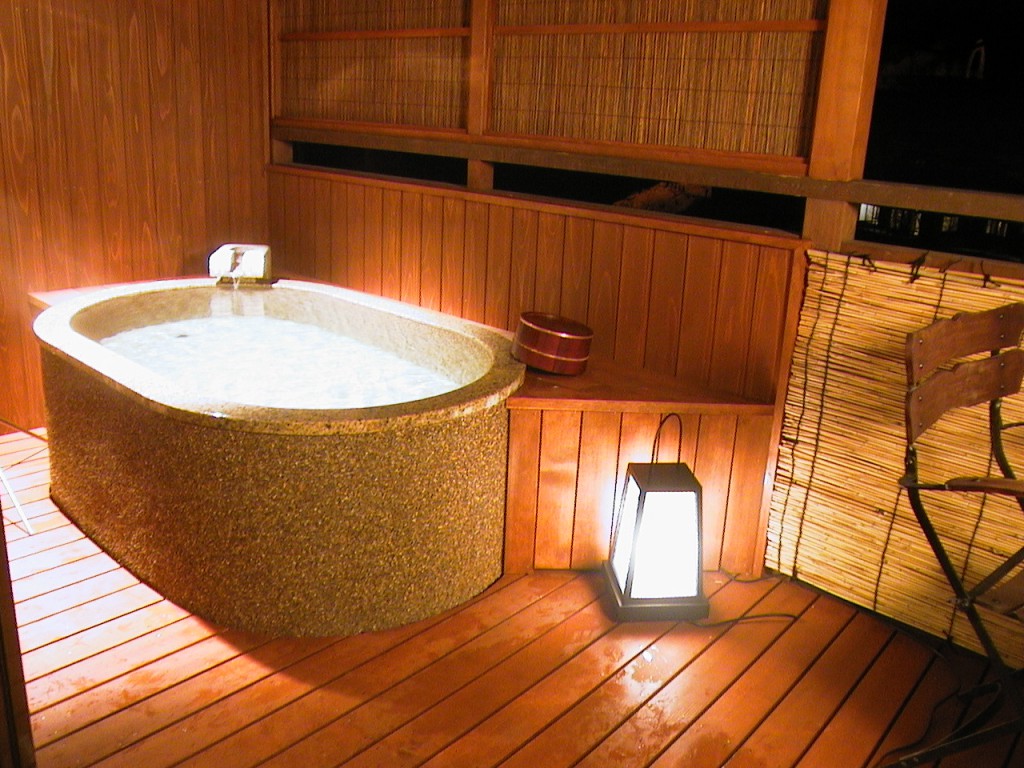 Popularity of such ryokan with the style has been increased since the 1990s.

The introduction of private onsen at “Kashikiri (Private) Onsen.com” http://kashikiri-onsen.com/ (Japanese page) is easy to understanding. That is a portal site, which introduces ryokan with private onsen and rooms with open-air bath. So I will quote it as following.

There are roughly two types of “private onsen,” which is the theme of this website.

Bathes that can be reserved in time system is particularly increased recently.

The boom started among young couples, then, it has been more popular among middle-aged and elderly.

Furthermore it has evolved to more luxury.

There are more and more ryokan that has rooms with open-air bath.

In any case, it used to be natural to reserve a bath privately for couples. But from some time, the system was divided into male bath and female bath.

So sadly we had to take a bath separately, though we travel as a couple or a family.

Today’s “private onsen” boom may be inevitable, according to the needs of this era.

In the Kanto region, the expression of “private bath” is popular.

In contrast, in the West region, it is expressed as “family bath.”

They basically mean the same thing.

Yet, isn’t “private bath” is more luxurious image and seems to have bigger bath than “family bath”?

(Quoted from http://www.kashikiri-onsen.com/onsentte.html, translated into English)

It has been an issue in Japanese onsen industry recently as; Is it all right to ban people from overseas with tattoos to take onsen?

Private onsen and rooms with open-air bath are one of the effective solutions for this issue. 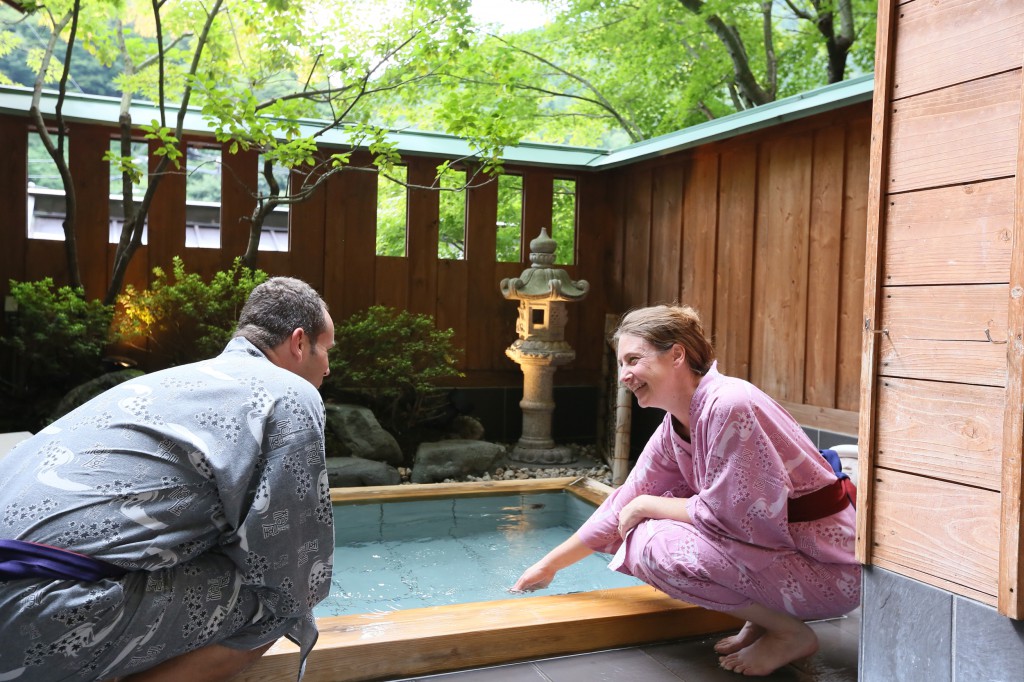 However, like our Shima Onsen Kashiwaya Ryokan, there are more and more ryokan, where you can take onsen with tattoos by providing private onsen and rooms with open-air bath.

Do not give up taking onsen just because you have a tattoo. Look for ryokan with private onsen and rooms with open-air bath and enjoy onsen, the culture of Japan.

The ALT Special Plan! The Perfect Way to Enjoy Japanese Culture and Onsen

Shima Onsen Kashiwaya Ryokan has begun a special deal just for ALT’s currently residing in Japan. With this special pl...

Difference between Ryokan(Japanese inn) and Hotel

To say couples, there are various couples, such as lovers who began the relationship recently, just married couples, an...

Description When saying onsen resort, people tend to imagine it to have left far from towns such as Tokyo. Yet, actuall...

Tetsuo Inoue / Our chef First of all self-introduction I am Tetsuo Inoue, served as a chef since 2011. When I f...
Japan Expressway Pass: Exclusive Expressway Discount Pass for International Visitors
Are people with tattoos allowed in onsen?